On Saturday, February 25, I was able to join the Miami WAVE Team from Wayside Baptist Church in the Pinecrest Relay For life.  The event started at noon but we were there early to set up and prepare for the day’s events. Vision 2 Hear and the WAVE team was one among many great talents and artists sharing entertainment and stories of hope for those dealing with cancer.

This is Kathi and Amanda setting up a display for Jaivon Kemp who was part of one of our WAVE teams several years ago at PBCA who succumbed to brain cancer when she was in 4th grade.

Just a couple of short months ago, another student associated with members of our team passed away from brain cancer. His name was Michael Vile.

Both of these students were very inspirational to our team.

Since last November, Kathi has been working diligently on details for getting the Relay together for the WAVE team to participate. All of her hard work certainly paid off!

The team not only performed well in music and sign but they generated funds and much awareness  throughout the entire process.

The theme for the year’s relay was Romantic Movies and our team chose Stardust.

With the announcement of our name everyone marched around the field and prepared for the kickoff performance.

The Relay was made up of over 40 booths and tables of sponsors with a couple thousand showing up throughout the day. Our team performed several songs on this 84degree day. Check out some clips from the songs here:

The event continued with something called “Miss-ter” Relay. This is when each team has to have one guy from their team dress like a girl and try to convince people to give them money. Whoever generates the most money in an hour wins. Carl came in second place generating over $40.

The team did various other things to generate money like selling chocolate covered pretzels to playing games with the kids. David Ramos also brought his saxophone and played for 45 minutes walking around for donations. The response was great as well! You can see from this picture that a woman is pulling out some cash to make a donation!

I had to leave earlier than the scheduled time for the event’s end. It officially started at noon Saturday and as to go until 6am on Sunday morning. I was only there for a few hours and we even performed for much less than that. In fact, I wasn’t really even in the sun for very long, but as you can see from this picture, the sun was intense enough to give me a good cooking on my head.

It was great though and worth it to be part of this wonderful event that raised thousands of dollars to try and find a cure for cancer. We are all affected by this tragic disease and it was my privilege to be part of helping to raise funds and support the effort. My grandfather (George Washington Lockhart) died from bone cancer when I was 15 years old and being that he and my grandmother were raising us, this was devastating to say the least. So I am thankful for those who are fighting the disease and fighting for a cure! 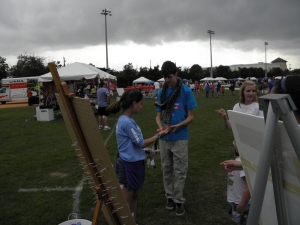 Thanks so much to our Miami Wayside WAVE Team and Kathi Gallo for heading all of this up for Vision 2 Hear and the Relay For Life! I’m so proud to work with such great students and leaders! Keep up the great work in Miami!